Abstract: Endosalpingiosis is a condition in which fallopian tube-like epithelium is found outside the fallopian tube. It is a non-neoplastic lesion of Mullerian system. This disease was first discovered by Sampson in 1930. Endosalpingiosis incidence is rare compared to endometriosis (about 5-10%) and it is commonly found in reproductive-age women. Endosalpingiosis diagnosis is confirmed by histopathological examination. The objective of this case report is to increase our knowledge about endosalpingiosis. We reported a female, 36 years old, P1A0, with lower abdominal pain for the last 4 years. The woman had a regular menstruation every month with dysmenorrhea. On physical examination, it obtained normal vital signs and normal nutritional status with BMI of 23.29. On gynecological examination, it showed 7x6 cm palpable cystic mass in the right adnexa and mobile. The result of transvaginal ultrasound showed the presence of hypoechoic masses on the right and left adnexa with 7.97x7.95 cm and 3.28 x2.87 cm in size. During laparoscopy, right paratubal cyst and pseudocyst on the left adnexa appeared with 8x8 cm and 5x4 cm in size, yellowish-white color, and uterus to rectum adhesion. Adhesiolysis as well as bilateral cystectomy were conducted and then the histopathological result showed paratubal serous cystadenoma with endosalpingiosis. Endosalpingiosis is a rare case. The attention to this rare case will prevent us from making a wrong diagnosis and over-treatment.

Endosalpingiosis is a non-neoplastic lesion of Mullerian system, which is rarely found. Endosalpingiosis is a condition where the epithelium cell of the fallopian tubes found outside of the fallopian tube, the cells can be found in the peritoneum, tissue of subperitoneal, omentum, retroperitoneal, urinary vesicles, can even be found in other organs outside the pelvic as in the thoracic region, duct choledochal and in the axillary lymph nodes. [1, 2] This disease was first disclosed by Sampson in 1930. [3, 4] Some scientists have also been reported cases of such endosalpingiosis such as Rose Bermejo et al in 2012 and Mohiedean Ghofrani MD in 2011.[1, 5] The incidence of endosalpingiosis is a little compared with the incidence of endometriosis, which is about 5-10% and is commonly found in women of reproductive age aged between 30-50 years than in women of postmenopausal age.[6] Our objective of this case report is to increase our knowledge about endosalpingiosis

Endosalpingiosis exact cause remains unclear, but several theories have been raised by scientists among others implantation theory by Clement and Young who reported 9 cases of Mullerianosis that occurs in patients with a history of pelvic area surgery. [6, 7] Other allegations, the presence of chronic salpingitis may precipitate tubal epithelium cell implantation in other places as well as the emergence of serous ovarian tumors can trigger the maturation of tumor implantation.[8] The presence of endosalpingiosis found outside pelvic area also indicates that the displacement torn of epithelium cells through the flow of lymph or blood vessels as a mechanism that may occur. [3, 6]

In endosalpingiosis there is not found cytogenetic endometrial such as stroma responded to hormonal cycle (menstruation) so as to be distinguished with endometriosis, and does not indicate a stratification of cells and atypical mitotic activity or that must be differentiated with carcinoma. [1] 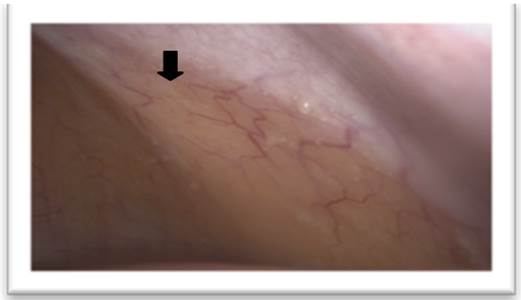 Endosalpingiosis diagnosis is made based on the results of microscopic examination by a pathologist through an incision (e.g., biopsy). Macroscopically, though rarely evident, it can appear as multiple small cysts colored in yellowish white (1-2 mm) as shown in Figure 1 and more rarely as large cysts that can be confused as neoplasms. [1, 5]

Microscopically it appears glands and tubules limited by the type of fallopian tube cells (i.e., cells epithelium ciliated) surrounded by fibrous stroma, sometimes also surrounded by chronic inflammatory infiltrate. Usually also looks calcification or bodies’ psammoma. [5, 11] Another case if a cyst with tubal epithelium cells are surrounded by a type of endometrial stroma, that certain condition is not endosalpingiosis but rather a variation of endometriosis. Endosalpingiosis sometimes also be found in the lymph nodes that could be interpreted as metastatic adenocarcinoma. [11]

Here is an overview of endosalpingiosis under a microscope with high magnification, seemed typical of cysts bounded by epithelium cell ciliated after staining H & E. [11]

Figure 2. Appears a cyst with a gap bounded by ciliated epithelial cells (left) and can also be found in the lymph nodes (right) (quoted from the literature 11).

A woman, 36 years old, P1A0, came to the clinic with complaints of lower abdominal pain since the last 4 years. She has regular menstruation each month with 4-5 days menstruation with dysmenorrhea. History of vaginal discharge and fever denied. She also has history of vaginal delivery in 2004 and never used contraceptives. In the physical examination we obtained vital signs within normal limits, normal nutritional status with IMT of 23.29. From gynecological examination we found palpable cystic mass in the right adnexal size 7x6 cm, mobile, noticeably tenderness. The results of trans-vaginal USG gynecology appears the presence of adnexal masses hypoechoic on the right and left of each measure 7.97 x 3.28 x 7.95 cm and 2.87 cm (figure 3).

Via laparoscopy, appears uterine size 7x5 cm with slippery surfaces experiencing adhesions with rectum in the posteriorly (Figure 4a), conducted adhesiolysis. It also seems right paratubal cyst measuring about 8x8 cm (Figure 4b) and pseudocyst on the left adnexal size of 5x4 cm (Figure 4c), smooth, fluid-filled yellowish white. Cystectomy performed on both the cyst. Once bleeding is controlled, tubal patency test is done and both tubes patents. Both cysts are examined in anatomic pathology laboratory of Wahidin Sudirohusodo Hospital with histopathological results of cystadenoma serosum and endosalpingiosis. Postoperative day 10 the patient came for a control with both surgical wound and complaints of abdominal pain that decreases.

Here is an overview of histopathology of the tissue of cyst removed. In Figure 5 below the tissue shows the cyst which consists of connective tissue covered with cuboidal epithelial layer, on the other part there is a connective tissue structure covered with 1-2 layers of ciliated columnar epithelium, the core is not atypical, thus diagnosed as Cystadenoma serosum paratubal with endosalpingiosis. 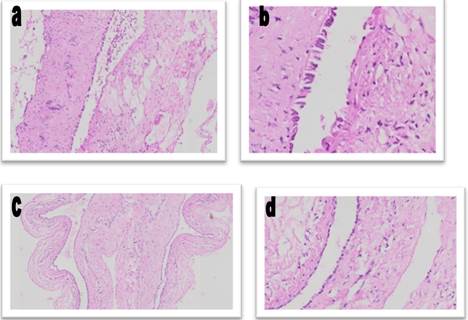 Endosalpingiosis is a rare case found and the exact cause is still unknown. Clinically and experimentally revealed two mechanisms of pathogenesis of endosalpingiosis, namely metastatic spread from epithelium cells to the area and the presence of ectopic and metaplasia in the mesothelium pelvic, where the mesothelium pelvic and lower abdominal is ontogenetic with Mullerian duct known as the initial formation of the female genital tract. However, most scientists adhere that pathogenesis of endosalpingiosis is due to the change of metaplastic from pluripotent peritoneum. In addition the migration of Mullerian tissues during embryonic development or during surgical intervention is another mechanism that might occur. [1, 3, 6]

Symptoms of this disease is not typical, some scientists discovered various symptoms and some have no symptoms (asymptomatic), that ultimately usually endosalpingiosis is a coincidence condition found. The symptoms complained also depend on the location of the lesion; generally, complained symptoms are chronic pelvic pain, infertility, irregular menstruation, dyspareunia, gross hematuria, gastrointestinal tract obstruction, and jaundice. Endosalpingiosis could be symptomatic due to mechanical irritation of abdominal organs, for example in the case of large cysts of endosalpingiosis causes chronic pain in the waist, where the surgical removal of the cyst can relieve symptoms, such as cases which have been reported by Andreas H Scheel from Germany in 2013. [2, 6, 12]

In this case, the patient complained of lower abdominal pain caused by cystic mass of right paratubal growing larger and experiencing friction with other abdominal organs and the presence of rectum with uterine adhesions that cause the sensation of pain. Carried out adhesiolysis (release of adhesions) in order to reduce or eliminate the pain of his stomach. This patient also experienced secondary infertility, that after ten years of childbirth until now had never been pregnant again. The cause of infertility was most likely caused by a big right paratubal cyst causing pressure in the fallopian tube channel, which in turn causes a narrowing of the lumen of the tube, that the ovum transportation and sperm transport were disrupted.

Therapy in endosalpingiosis is basically not necessary because it is generally asymptomatic and has never been reported to undergo a transformation into a malignancy, although such therapy is performed depending on the condition and discovered cases such as ovarian cysts, brown cysts, fertility, pelvic pain, adhesions and dyspareunia. [6, 11] In this case we did bilateral cystectomy to improve reproductive function and eliminate the cause of the obstruction in her right fallopian tubes. We also carried out chromo tubal patency test and the results both tubes were patent.

Characteristics of endosalpingiosis are still difficult to diagnose and distinguished from ovarian malignancies as well as benign changes in the other ovary, that it is necessary to obtain a confirmation of histopathologic examination prior to the surgical procedure more aggressive. It is also necessary for clinicians to be more professional to avoid mistakes in diagnose and prevent over-treatment.

Endosalpingiosis is a rare case. The attention to this rare case will prevent us from making a wrong diagnosis and over-treatment.